Sudoku Champion is a powerful Sudoku program with a large number of features: You can create your own Sudoku settings, or have Sudoku Champion create one. You can save and load puzzles, and you can copy and paste them as text so you can easily share them by email. Sudoku Champion can solve a Sudoku on its own, or it can give you different forms of hints, or you can solve it all by yourself. Finally, you can also print Sudoku puzzles. 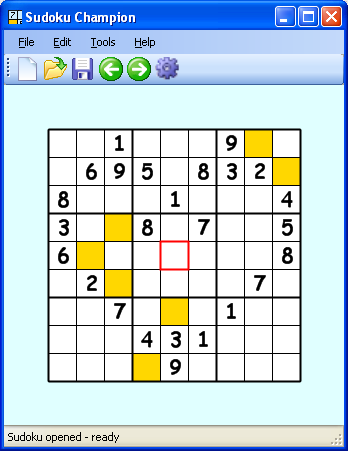 : SudokuChampionSetup.exe (331KB).
To install, run the setup program on your computer. If you do not have the Microsoft .NET framework 2.0 installed on your computer, Sudoku Champion will not run. Download it if necessary on the .NET Framework page of Microsoft. To find out whether you still need the .NET framework, you can simply install Sudoku Champion, and if it runs, you have it!

You can send feedback and feature requests to nospam1 at fierz dot ch.

When you start Sudoku Champion, it opens with a newly generated puzzle for you to solve. Every puzzle has a unique solution. Sudoku Champion always highlights the currently active cell by drawing its border in red. To change the value of the highlighted cell, just type a number from 1 to 9 on the keyboard. Typing 0, delete or backspace will clear the current value of the cell. You can move the active cell with the arrow keys or by clicking a different cell with the mouse. While you solve the puzzle, Sudoku Champion offers you different types of help:

I wrote Sudoku Champion as an excercise since I was learning C#. The best way to learn a programming language is to actually write a program and learn by doing. I got the idea to write a Sudoku program from Léonie Fierz (who is no relation of mine): She was a student in a Science course for Swiss youths, and told me that she was supposed to write a Sudoku program as an assignment in class. I was motivated to write Sudoku Champion when I saw the most beautiful woman of the clinic Königsfelden solve one on the train from Brugg to Zürich. I finally started writing it in march 2006 in my mountain retreat in the Engadin.

Thanks to Stefan van Ekeren for beta testing, and Andreas Umbach for helping me with the flicker problem.


This page was last updated on April 17, 2006 using Arachnophilia